On the Journey of Self Discovery we can feel the tension between the demands and expectations of others and the inner drive to express our own individuality.

While ‘society’ may pay lip service to just how individual we are, it is by working with astrology that we are truly confronted with that realisation.

And it is through astrology that we find a language to articulate those differences.

While Frith Luton is a Jungian analyst in private practice, there are some notable connections between some Jungian understandings and the astrological model. The commentary below will show these connections.

The Journey of Self Discovery was key to the work of Carl Jung, the famous Swiss psychiatrist.

Commentary on The Journey of Self Discovery Video

After this commentary, there is also a full transcript of this video below.

Regarding: “At a time when Victorian society prided itself on being highly rational and civilised…”

Aren’t we still in that kind of society? Aren’t the expectations of those in positions of power still that we should act as if we were “highly rational and civilised”?

And yet, at the same time as this, the global marketing industry is appealing to our emotions more than our rationality. Because Marketing knows how un-rational or irrational we can be at times.

Regarding: “Freud believed that sexual urges were the sole driving force behind human behaviour…”

In terms of astrology, this would be like saying that we have only one planet in our horoscope. Or perhaps some variation of this statement. Like, if Mars was the dominant planet.

In contrast: “Jung believed that we’re influenced by many other factors like religious beliefs, the need for approval, and the drive for power.”

Clearly this is not an exhaustive list, but just a few examples. However, we already have a sense that Jung is on the same page as astrology in recognising a range of factors that can provide individual motivation. This motivation can be sequential, or concurrent. Such motivation can be complex, intertwined with other concurrent motivations. And it can lead to what Jung referred to as ‘Complexes’.

Regarding: “It is this Collective Unconscious that leads human beings around the world to adopt similar behaviour patterns without even realising it.” and –

“These are universal behaviour patterns. They just appear in different clothing at different times.”

Archetypes in Astrology and Jungian work

Astrology recognises archetypal patterns behind each sign of the zodiac. These are essentially primary archetypes. Jung recognised more complex patterns, which could be referred to as secondary or even tertiary archetypes. 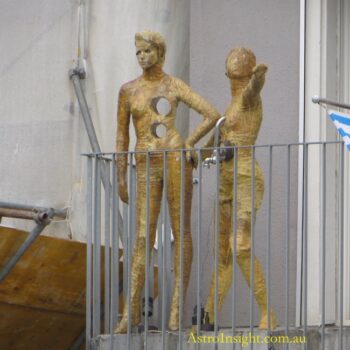 The training and work of a Jungian analyst involves working with and interpreting a vast range of symbols that occur in people’s dreams and life experiences. Some of these are strong and clear archetypes, and others are nuanced by various modifications.

A colour created by the mixture of three primaries is called a tertiary colour. While we might call this brown, it can be anything from a slightly less bright orange, a duller green, or a less bright purple and millions of shades in between.

Just look at the colour charts at your local paint supplier next time to see how vast the choice of home decorator colours is. This is an analogy of the range of individuality in people, in dream imagery, and that found in horoscopes. – In short, the final colour could be anything, but all colours are a mixture of a small palette of primaries.

The astrological parallel is that a person’s life could be totally individual and unique in its events, but the underlying structure comes from a defined range of archetypal patterns. These patterns relate to each other in unique ways in each individual.

The Implications on the Journey of Self Discovery

From personal experience we feel that consulting our own horoscope is one of the easiest and richest sources for the journey of self discovery. – Whether through a series of Horoscope Readings with one or several astrologers, or a combination of personal study and reflection.

The Journey of Self Discovery, ultimately becomes a life-long journey. Its reward is a sense of inner self knowledge, self possession, and inner wealth. Jung himself valued this inner world above all else.

Transcript of Carl Jung and The Journey of Self Discovery

There are billions of people on the planet and many different personality types.

Some people are introverted, some extroverted. Some are driven by logic and others by their feelings. In a world of such diversity how do we learn to relate to those who are different? and how do we learn to understand and accept who we are?

“People have a desire to know themselves. People want to know: who am I, how do i function, how do I tick?”

These questions were at the heart of the pioneering work of Dr. Carl Gustav Jung, a Swiss psychologist who began working at the turn of the 20th century. Despite the conformity and dress behaviour and attitude dictated by his time, Jung championed individuality and he invited his patients to embrace the unique person each was meant to be.

“Jung said “OK – that’s what society tells you that’s what’s expected of you, but what do you think? How do you feel?”

“He said that we all need to get to know ourselves better and know our motives better and if we could really look at that more that we would be able to be more accepting of differences.”

In his own life Carl Jung embarked on a painful journey of self-discovery and the lessons he learned provided inspiration for generations to come.

In 1909, at the age of only 34, Carl Jung had succeeded in creating the life he’d always imagined. Born the son of a poor country minister, Jung married the wealthy Emma Raschenbach. Together they built an idyllic home and family.

Jung had worked his way through Medical School and had become a world-renowned psychologist in Zurich, and as the chosen heir apparent of pioneering psychoanalyst Sigmund Freud, Jung was at the centre of a revolution taking place in the world of psychology. That revolution was based on Freud’s radical concept of the Unconscious.

At a time when Victorian society prided itself on being highly rational and civilised, Freud argued that people were really driven by repressed urges they weren’t even aware of. Jung was one of the few who had embraced Freud’s provocative ideas.

The pair quickly became partners in promoting psychoanalysis around the world and slowly they were gaining the respect of the mainstream medical community. In Freud, Jung had found not only an important professional mentor, but also a father figure. His own father died when he was just 20.

“The death of Carl Jung’s father ended any money coming into the household and it was up to him, then. He was the only son. It was up to him to take care of both his mother and his sister.”

“And so, keep in mind, Jung was sort of an orphan. He looked for a guide, the father, you understand, and he found that in Freud.”

Jung’s future seemed secure but there was just one problem. Jung had nagging doubts about some of his mentor’s theories.

“For Jung, Freud was too closed, too narrow. Jung was very open, you know, he closed his eyes to nothing.”

Jung spoke about Freud in a 1959 interview: “I liked him very much, but I soon discovered that when he had thought something then it was settled, while I was doubting all along the line.”

Freud and Jung’s Point of Disagreement

Freud’s theories on the sex drive were particularly troubling to Jung. While Freud believed that sexual urges were the sole driving force behind human behaviour, Jung believed that we’re influenced by many other factors like religious beliefs, the need for approval and the drive for power.

“Freud said in effect “No, it’s sex or nothing” and Jung said “I can’t accept this theory wholeheartedly” and this is really what caused the rupture between them.”

Things came to a head in 1913 when Jung published a book which directly contradicted Freud’s theories. Unwilling to tolerate dissension in his ranks, Freud cut all ties to his former protege. Jung’s mentor now became his most outspoken critic. Carl Jung was ostracised from the psychoanalytic movement he’d helped to establish.

“It was a big blow to Jung he went through a period of disorientation and a period where he wasn’t really sure whether he had lost his sanity or not.”

“Though the the separation was in the coming, it threw Jung into a deep depression, which however was beneficial, it was liberating. He had to go on his own. The son has to do his own thing.”

Jung On his Own Journey of Self Discovery

Ultimately Jung would go on to do his own thing but the years ahead would be difficult. Just months after Jung’s own life had been shattered the fabric of Victorian society was also torn apart. As World War one exploded across Europe, Jung retreated to his house on Lake Zurich to fight his own internal battle.

“He went down to the beach in front of his house and played with the pebbles and sand and he said “I don’t know why I’m doing this, but this is the only thing right now that will relieve the anxiety and the disturbance that I’m feeling.” From there he went into what he calls the confrontation with the unconscious.”

Desperate to find his way personally and professionally, Jung began a process of deep self analysis. He spent hours alone recording his thoughts, analysing his dreams, and making elaborate drawings as a way to express the deepest parts of his Unconscious.

“Jung used this period to think about what he was going to do with his life. He said to himself: “I can’t continue to practice psychoanalysis if I use Freud’s terms and Freud’s methods. I have to create a system of my own.”

Carl Jung’s work on the Unconscious

As he probed deeper and deeper into his own psyche, Jung became increasingly convinced that his Unconscious was driven by more than just sexual urges, repressed thoughts and memories. There was another influential force that Freud had overlooked – the history of civilisation.

Jung had studied many of the world’s cultures and religions and he observed that even the most dissimilar share common ideas and behaviour patterns. He found, for example, that Native American Indians had certain stories and rituals in common with tribes in Africa and other cultures throughout the world.

“And he said these things are in common and these people don’t know anything about each other. They have no way to communicate with each other. And how is it, why is it, that they are all telling a very similar, if not the exact same version of this same story?”

Jung concluded that the Unconscious is influenced not only by our own experiences, but by the collective experiences of all people. These common ideas are passed down through history, religion, and culture. He called this wealth of inherited knowledge the ‘Collective Unconscious’. It is this Collective Unconscious that leads human beings around the world to adopt similar behaviour patterns without even realising it.

“Or the father as the great good figure who dispenses all knowledge and all wisdom; an unforgiving disapproving mother.”

“These are universal behaviour patterns. They just appear in different clothing at different times.”

To book your Horoscope Reading call us during business hours:

Enquire about availability for Astrology Consultations

Search for a Topic